Mongolica. One hour outside of the capital, surrounded by rocky peaks, frozen rivers, and chalky earth, this resort was the location of a week long Peace Corps conference for project design and management. This annual conference is an opportunity for first-year volunteers to learn the basics of grant writing, project management, and planning for sustainability. There were around thirty volunteers who came for the conference, and each of us brought a counterpart from our respective communities.

In order to attend, each volunteer had to submit a needs assessment in December, that identified what problem we wanted to address, how we identified this problem, what our intended goals were, and what level of community interest we had in our project. The project that I brought to the conference is one that will take quite a bit of time, resources, and mobilization, but it is a project that has generated a fair amount of community buzz, and it is one that I think will be worthwhile.

At the center of my village is a big stadium. Many years ago, it was used to host Naadam, Mongolia’s summertime manly man sport festival. Then, around 2008, the space was abandoned. Per tradition, alumni from my soum’s high school typically gather for large anniversaries to plan an event or project that gives back to the community. One group decided to build a new stadium on the outskirts of our village. While this project was a great success and yet another example of the incredible and persistent community compassion that I’ve witnessed since being here, it also resulted in the neglect and degradation of the former stadium. Its white surrounding walls have since started to crumble and have been stained by a decade of dust. Former murals of various sports events in action are now paled and faded, some even lie beneath newer drawings of genitalia. On the wall next to the stadium’s entrance (a barred gate held close by a rusty, wiry mesh) is a welcoming expletive tattooed in black spray paint. 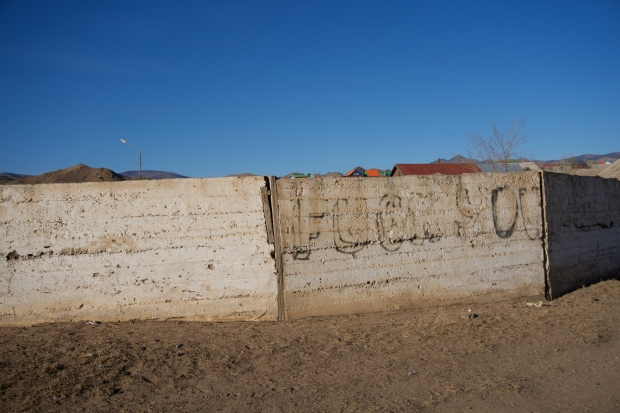 When the time came to brainstorm projects for my community, I instantly thought of the stadium. Having passed it many times on my way to buy bread, I was pretty familiar with its raggedy state, and had never seen anyone on its field. Thus, the project began with a conversation. On a bus ride for a training event, I turned to my counterpart and began to ask questions. Owned by the local government, the stadium, she said, became functionally-irrelevant when the newer space had been built. My initial observations were right. The stadium was a community afterthought. A stoic symbol of what once was. 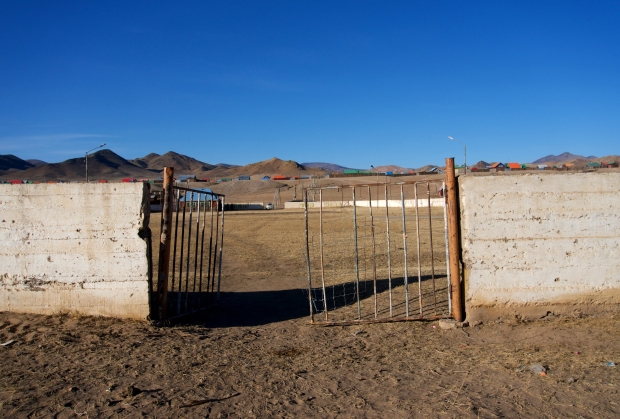 Upon mentioning the possibility to receive grant funding, and sharing my interest in doing something with the space, my counterpart’s eyes glimmered with the realization of what could be. In the weeks that followed this conversation, we started talking with more people at my school. What did they think, what would they change, how would they go about it? Using this information and wave of excitement, I started creating surveys in English and Mongolian. Distributing the surveys at the community hospital, the government building, and amongst workers and teachers at my school, I was able to collect around 100 responses. This data on types of renovation, interest in stadium restoration, interest in helping with the project, and reasoning for wanting a new stadium, was the backbone for the needs assessment that I submitted to Peace Corps. Using the results, I crafted data sheets to prove that our project had direction and support. Having this supplemental reassurance was huge, but there was a larger question that we needed to address: sustainability. 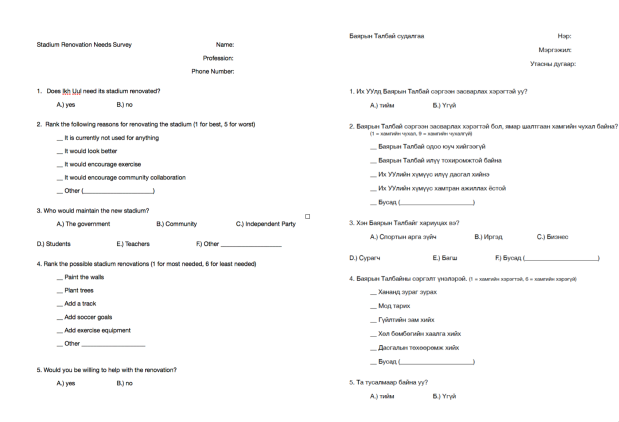 Before coming to Mongolia, when thinking about international aid I often used a critical lens to assess the short-term effectiveness of unsustainable projects. The question of what will happen to an international initiative or mission when an intervening agency loses funding or has to leave, is one that guided a lot of my interests in medical anthropology and NGO-sourced development. While this is still something that I think about, I’ve been pleasantly surprised at Peace Corps Mongolia’s emphasis on work that empowers communities and people. It’s this kind of emphasis that guides the feedback I receive on teaching as a facilitator. It’s this kind of emphasis that results in Peace Corps turning away grants that only ask for materials, and do not have potential or intentions to build capacity. The question that I needed to address was: How will restoring a stadium contribute to the health-empowerment goals that I hope to inspire, and what’s preventing a restored stadium from being neglected all over again?

In thinking through these questions, my idea of what the project was began to change. I didn’t just want to build a new stadium for my community, I wanted to create a space whose environment was inviting and inclusive. I wanted people of all ages and abilities to feel comfortable and capable of exercising. Since arriving in my community, there has been no doubt in my mind that sports are incredibly valued. If you asked me one year ago what I would be doing in Mongolia, I would never have guessed that I’d be serving a volleyball in front of hundreds of spectators at a community competition. People love sports. In teaching about exercise, nutrition, smoking and alcohol, I’ve always been able to relate the topics to my students’ lives by mentioning how unhealthy behavior in these topic areas can affect their ability to play well. While this is all fine and good, the intensity of competition in my community can be very exclusive. Speaking from experience, even if you’re on the court for a volleyball match, if you’re not playing a good game, your team will not set you the ball or let you return volleys. You’re really just a body. The competitions are great for stirring up excitement around exercise and bringing people together, but ultimately, a majority of people exclude themselves from the possibility of trying when they know and are treated as though they are bad.

This problem of exclusivity was brought to my attention when teachers at my school wanted me to teach a fitness class just for teachers who were older or a bit out of shape. This class has been one of my greatest successes at site so far because it has had regular attendance, consistent excitement towards the activities, and has had a welcoming atmosphere for anyone that shows up to participate. Aesthetic restorations like giving the walls a new paint job and replacing the entry way with something wider and more appealing, will help to transform the space into one that is more inviting. Functional restorations like installing a clear running/walking path, trail-exercise equipment, soccer goals, and a basketball court, will enable people to exercise on their own accord without the premise of some larger competition. This is our first goal. Our second goal is to acquaint the community with the space.

In the aftermath of construction, my counterpart and I plan on holding workshops for physical education and dormitory teachers. These workshops will share with them activities in the stadium that they can do with their kids. We plan on teaching these sessions with an emphasis on participation over winning. My counterpart and I also plan on holding workshops for older community members, to share with them the importance of regular exercise and how something as simple as walking can make positive, dramatic changes to one’s personal fitness. Using the restored stadium as a teaching space, will make it more than an object to be neglected or vandalized. That is why it is crucial that whatever construction occurs is followed up by an introduction to the space for a diverse assortment of community members.

The project is large in scale, but its size and demand for resources and time is an opportunity to be more sustainable. Proper planning, implementation, and above all, collaboration, will work to build intrinsic investment in the space’s well-being. The more people that we involve in the project, the greater the likelihood that the space will be used actively, and that informal care-taking will take place (official agency of maintenance will be determined with the community government). Since my counterpart and I attended the PDM conference, we are eligible for a couple of Peace Corps specific grants. Currently, we are working on these applications and determining a precise budget for materials and labor. Even in the early stages of the process, the wide-range of support that I’ve received has been remarkable. My school’s director wants to be regularly updated, an electrician recently went with me to take field measurements, one of my school’s art teachers used a graphic design program to create a visual model of what the field could be, and government leaders have expressed their desire to create public service teams to accomplish specific restoration tasks; it is this kind of support that will make our objective a sustainable reality.

Attending PDM was not only a chance to refine our community project’s aspirations and trajectory. It was a time for my counterpart to develop skills and a navigational framework for facilitating more local projects long after I’ve gone. One of the coolest aspects about PDM was a session where everyone presented a poster on the clubs, initiatives, and workshops that they are trying to accomplish. From camps on gender equality and resource rooms for health education, to disaster relief efforts and a backpacking trip for young girls, the spectrum of projects was as diverse as it was inspiring. Here’s hoping that our project will continue to progress positively, collaboratively, and with the future in mind. 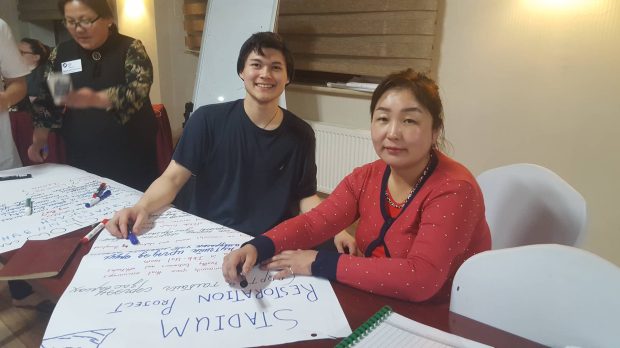