Idea: Borrow a bike from a friend in the aimag center and use it to travel back to my village

Trip: 110km (70 mi) through the rolling foothills and mountains of southern Khuvsgul. Two days on the road, one night on a mountain’s rocky outcrop, a few new friends, some great memories, and a couple of burning thighs 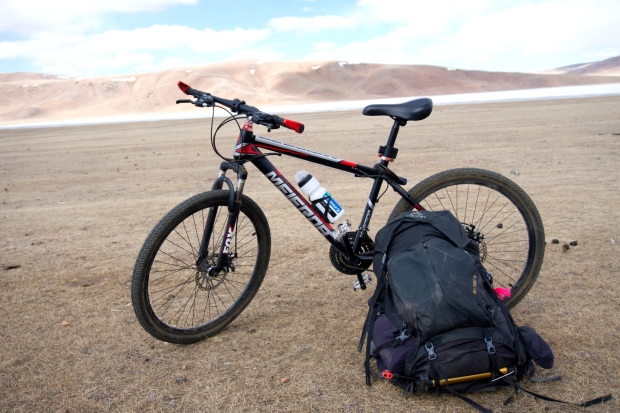 Originally thought about getting an early start and trying to shoot the 110km in one shot, but the warmth of blankets in the morning and the liberty of no other commitments said otherwise. Ended up leaving Murun (Khuvsgul’s aimag center) around 10:30 AM. Before leaving I made a quick point to look at google maps to get a frame of reference for what I should see at different segments of the journey, and picked up some spare cash in case I needed an emergency pick-up or rest in a waypoint village.

The first hour was smooth sailing. Temperature was perfect and with the wind blowing as I rode, I didn’t get too overheated from my layers or the weight from my mammoth of a pack. As the hour came to a close, I had navigated my way through Murun’s traffic and was past the town’s outskirts. There were plenty of stares and playful honks as I chugged my way through town – this would be just the beginning of a trip filled with unexpected interaction. Past the outskirts, the cars were much less, and I realized that even the slightest incline was too much for my bike and legs. The one gear that worked would attempt to shift automatically when I drove my legs down to power up a hill, so the unanticipated changes in resistance really messed with my mojo. I started to walk.

It was in hour two that I got a little concerned. There was a lot of incline, and it felt as though I was walking a lot more than biking. In two hours I’d gone some 13km, and knowing that I’d have to do it almost ten more times was a bit discouraging. I had now accepted that I would be camping out somewhere, and was starting to wonder how the cold would affect my fatigue and recovery for another day of riding/hiking. Gathering up some strength with every segment of walking, I would then switch and continue riding. The rides were relatively quick bursts of energy but they made the kilometers go by faster. Riding on the highway, I was fortunate to be on paved road and have a marker for each kilometer that I passed. 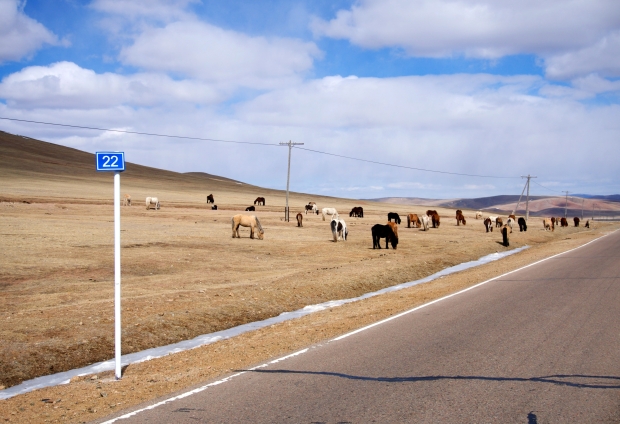 I went through Murun’s official town limit checkpoint, stopped for some water and pressed on. The terrain had shifted to downhill so I was happily coasting down slopes on the bike. The first major landmark was a lake that I’d seen on so many car rides into Murun, but had never been able to stop and explore. This opportunity to go slowly and take in the whole journey was a major reason for my desire to bike. At km 25, I arrived at the lake. Still frozen and surrounded by mountains, it was really stunning. I rolled the bike next to an old decaying storage house, and sat down for lunch.

After lunch, the kilometers really flew by. My legs had found a rhythm and the bike seemed to have found a groove. It helped that kilometers 30 to 40 were almost all downhill. Truck drivers carrying huge loads of material from UB or Erdenet would wave cheerfully and laugh from inside their cabins. People continued to keep their heads on a swivel as they would pass me from behind, or from the opposite direction. I would smile back and sometimes wave. It was somewhere in this stretch that cars started to stop ahead of me on the shoulder, allow for me to catch up, and then insist that I throw my bike in the back and climb in. I would gratefully thank them, but then hit them with a, “zugeeree, bi chadnaa! Hiimeer bna shuu.” Essentially, “no worries, I can do it. I want to.” This would usually be met by a chuckle or a look of pity. 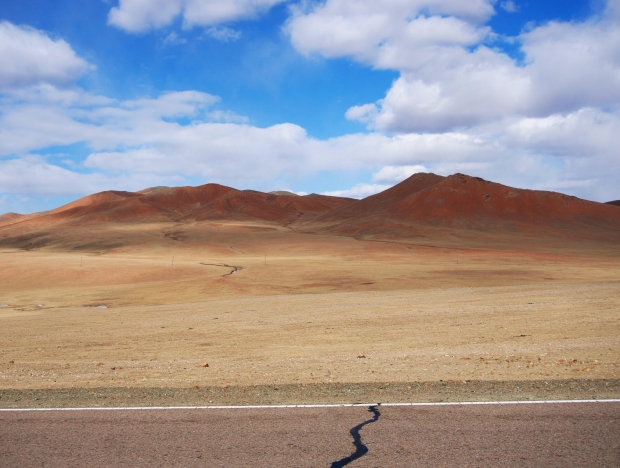 I ran into a few herds of goat and sheep in the road, and talked to the herders on horseback accompanying them. One was a boy around nine years old. He waited for me on the shoulder and looked at me expectantly without saying a word. I explained I was headed to Ikh Uul, to which he nodded and then said he understood. When I asked for his photo, he happily obliged before galloping off after his sheep. That’s one photo on the film camera that I’m really looking forward to seeing. Another herder gave me a friendly wave as I navigated the bike through his herd crossing the street. Thinking to myself how irregular I must look for this dude’s normal routine, I grinned and pedaled. It was here at km 45 where the chain gave out.

Pulling off to the side, I laughed, but was pretty bummed out that I might have to give in on the adventure. I inspected the bike and could see that the gears had snagged the chain in a funky way, and it’d take some finagling to get it back on track. After 10 minutes of yanking, and defeat starting to set in, I decided to put my winter gloves on and start pulling with everything I had. It broke free. I reset it, and was back on the road.

Around 5:30 PM the sun was golden in its afternoon shine, and I could see Tsonentsengel soum in the distance. Figuring that I should be close to some gers and hashas (homesteads) in case I got too cold over night, I peeled off the road a couple of km’s out, and hiked the bike up a mountain. Unpacking my stuff, I ate, put on all of my layers, threw my electronics into the sleeping bag and then climbed in with them. It was about 6:30 and I instantly passed out from tiredness. I awoke a few times in the night, once to catch the pink sky as the sun was setting beyond a western mountain range, and once to see the sky covered in stars. I stayed buried in my sleeping bag, and kept the mummy hood up and pulled tight to restrict cold air from getting in. Every now and then I would open it to ventilate, but in my state, warmth felt preferable to fresh air. If the weather forecast that I read before my trip was accurate, the temperature fell down to 15 degrees Fahrenheit. 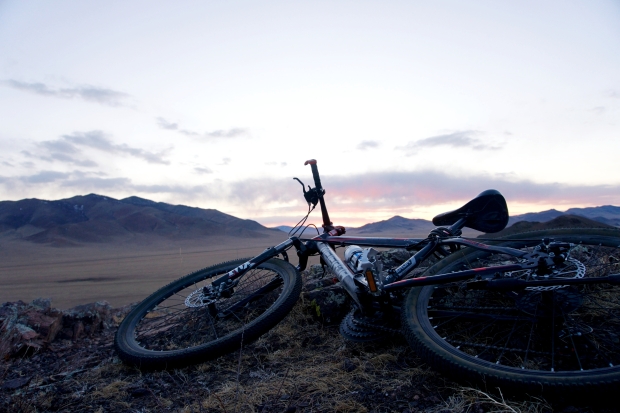 I woke up at 7:30 AM cold as all hell. Getting some fresh air through my mummy hole and then resealing it, my body’s reflexive instinct kicked in. To not deal with the cold, it fell back asleep. I woke up at 10:30 with the sun in full contact with my bag. Trying to get out of the toasty hot pocket, I squirmed my way onto the rocks and started packing up.  I had spent about 16 hours in that thing. Another late start, but hey, I was pretty happy to have survived the night.

Getting back on the bicycle was rough. My butt was super sore, and the pack felt especially deep on my shoulders. I took it easy and switched off walking and riding to get back into my former rhythm. Passing Tsonsentsengel, I met a couple of new friends. One guy passed by on a motorcycle and then swung around to go back in my direction. He stopped in front of me and started to introduce himself in English. We carried on a conversation in monglish. He was the cultural teacher in Tsonsentsengel and knew plenty of people from Ikh Uul, my soum. He was very curious in why I would ride the bike so far, and I sort of just shrugged and said, “no idea.” After establishing that he would come visit Ikh Uul at the end of the month and we would hang out, he then proceeded to tell me he’d had a bit to drink that morning and could really use 2,000 tugrik. Basically trying to cop a dollar. Not really wanting to dig my wallet out from my pack, I told him sorry and we went our separate ways. 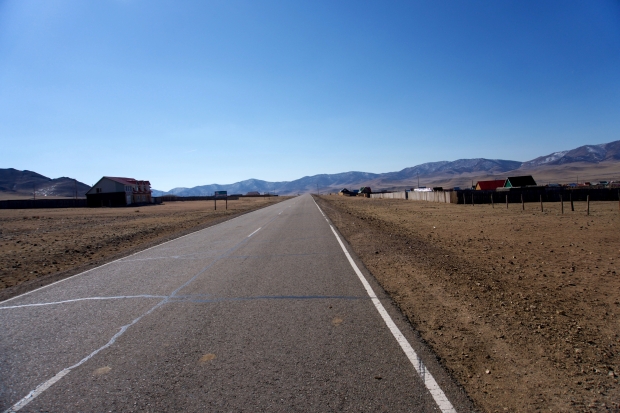 The next guy caught me while I was on a steady riding streak. He passed me on his motorcycle from behind and motioned for me to stop. He too wanted to know, “why?” and again I told him I didn’t really know. He laughed but was saying how cool it is that I’m doing it. We talked for a while and I learned a bit about his life as a herdsmen. He lived in the countryside outside of Tsonentsengel, and was on his way home with his two year old daughter. He asked for my number so that we could speak more in Mongolian and he could maybe learn some English, and then he said anytime I’m passing through that I should stop at his ger for tea and food. As we shook hands to say goodbye, his little girl’s face lit up, and after clapping her own hands together, she reached out to shake my hand as well.

The rest of the ride was fairly smooth. Having cranked out 60 km the first day, I had 50 left to go on day two. I found myself coasting through a lot of it. A few more people stopped to ask if I wanted a ride – one a hostel owner from Khuvsgul’s lake, and one a grandpa from my soum. Teachers from my school passed me in cars on their way to Murun and cracked up as they saw me peddling furiously back home. I stopped to admire more mountains, a person getting dropped off in the middle of no where to walk all of their stuff out to a countryside home, and an incredible monument that I’d never noticed before. All the benefits of traveling slowly.

I get a funny sensation in my stomach when I feel the anticipation of a great adventure. The lead up to this experience was no different. It was only a couple of days, but the trip definitely pushed me on a lot of different levels. My favorite moments had to have been the unexpected little and big interactions that I had with people along the way. A journey that I thought would be pretty independent was marked by many smiles, conversations, and well wishes. Traveling slowly through a route that I’d passed so many times before by car, was astounding. I got to explore areas that I’d only caught glimpses of before, and explore new areas that I’d never even noticed. I would definitely bikepack again in Mongolia and elsewhere. For my next trip, I would make sure that the gear I bring is all essential for my travel, and I might incorporate some village stops along the way to stock up on food, meet more people, and possibly trade my sleeping bag in for a bed. Such an awesome and feasible way to have an adventure, and experience the province that I’ve called home for nearly 10 months now.

3 thoughts on “Bikepacking in Khuvsgul”